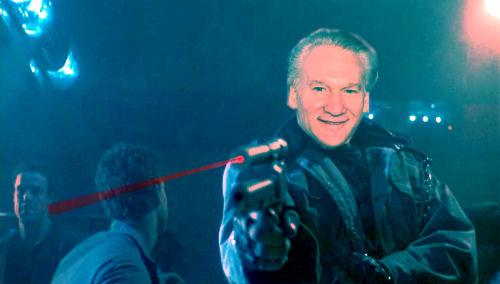 A large man approaches the front door to a house in the suburbs and rings the doorbell.  It’s answered by a middle-aged woman with a polite, but confused look.

“Are you Sarah Connor Palin?”, the man in sunglasses asks with a thick accent.

“Yes”, she responds, and immediately notices a small, red dot moving up her shirt towards her forehead.

Now fortunately the Democratic National Committee doesn’t have a time machine or bodybuilding cyborgs.  But as the saying goes, “there’s no time like the present”, and the DNC or their proxies are already on the hunt to pre-emptively “terminate” any potential opponent for the 2012 election.  Their squad of Terminators obviously isn’t going around with firearms, smashing through walls and doors to get their prey.  The target isn’t the actual members of the Republican opposition, it’s those individuals’ credibility which has been marked for termination. And in the interest of reserving Obama’s stay in the White House for another four years, this political machine feels no pain, no mercy, and absolutely will not stop until that credibility is dead.

Since shortly after the election, this squad of robots has been out in full force, running down a list which began with (and continues to include) Sarah Palin, moved on to young and popular Louisiana Governor Bobby Jindal, and now includes the fiscal conservative Governor of South Carolina, Mark Sanford.

All three individuals share the potential for a successful run at the oval office in 2012, and all three have been subject to the kind of vitriol that would earn a Republican all sorts of lovely labels including “sexist”, “racist”, “bigot”, among other things.  Governor Sanford had no doubt triggered all kinds of warning alarms in DNCNet when he displayed inexcuseable gall by daring to close his mouth when the federal government attempted to cram $700 Million of national taxpayer’s money down his throat.

So what is the weapon being wielded against Mr. Sanford in this case?

He went for a walk.

The Governor of the state of South Carolina took a few days off to go enjoy the natural beauty of the state  he governs and hike the Appalachian Trail.

And for this, he’s been accused of everything from having a screw loose to having a secret gay tryst with Rush Limbaugh.

I personally don’t care either way about all of this.  I just want to document it so that when my descendants wistfully ponder “the good old days when things were simpler”, this may be around to let them know that ultimately, shit never really changes.

Although they probably won’t get the Terminator reference by then.

Edit: Shortly after I posted this, Governor Sanford held a press conference during which he admitted to flying to Argentina to rendezvous with his mistress. My point about the Terminators stands, but it’s as if the Republicans are willingly walking into the line of fire at every opportunity.

Sigh, they really need to split the GOP. If they can lose the “moral majority” then there won’t be the epic, Ted Haggard-level of hypocrisy when they, as all humans eventually do, screw up. You can’t stand on upon a pedestal looking down on others if you’re up there banging hookers, soliciting gay sex in mens rooms, and cheating on your wife.