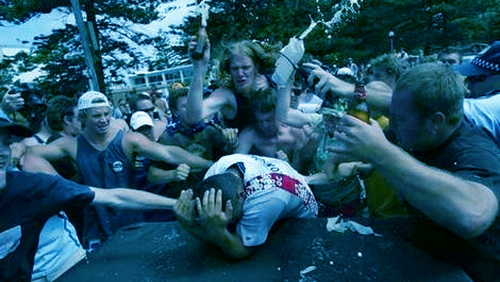 Stumbling around the net this morning, I came across this:

A Supreme Court decision forced a California state university Christian society to accept gays as members as a condition of receiving support from the school (“Other groups may exclude or mistreat Jews, blacks, and women — or those who do not share their contempt for Jews, blacks, and women. A free society must tolerate such groups. It need not subsidize them, give them its official imprimatur, or grant them equal access to law school facilities.”).

This ruling has upset Mike Adams, a prof at UNC Wilmington. He’s vowed to disrupt atheist student societies by filling their rosters with Christian evangelical students, “to use my young fundamentalist Christian warriors to undermine the mission of every group that disagrees with me on the existence of God.”

As PZ Myers points out, if the situation were reversed, Adams and his fellow travelers would doubtless be even more apoplectic: “I can just imagine what would happen if I tried to turn freethinkers on campus into militant disruptors of other organizations: their faculty advisors would descend on me in fury.”

But Mike Adams isn’t looking for debate. As he says, “I do not seek robust debate. I seek power over the godless heathen dissident.”

The reason I’m sharing this is simple. For a long time I’ve pointed out to people on my various websites, social media outlets, or in person, that as the members of a group with a shared world view or belief system dwindle, those that are left grow progressively more rabid and more radical. And this is something we’re seeing right now with fundamentalist Christianity.

As we (hopefully) continue the march of progress towards a society that would make Carl Sagan happy, this problem will grow in direct, inverse proportion to said progress. The further we shrink the gaps in which the conventional notions of “God” hides, the more violently will his believers defend their faith. In the next few decades, I’m sincerely expecting to see an increase in Fundamentalist Christian violence, including domestic terrorism. Don’t believe me? Ask George Tiller.

“Not all Christians are terrorists, but all terrorists…”

It’s just that it happens to be dangerously easy to generalize and marginalize any group by pointing to the most extreme members of that group; because the average person is busy going about their normal life and doesn’t have the time to put much thought into shades of gray.

Anyway, I’m rambling. This is what happens when you type out a blog post in three bursts, in-between doing genuine work. I guess this would be the part where I bring all the strings of thought together for a conclusion, but that would require going back and re-reading everything I wrote. Instead, I’ll just say this: