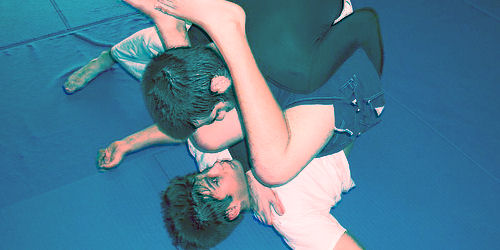 Server was out so I got to class technically late but in time for the rolling. We did a round-robin and somehow I ended up as the guy for the station that was in the cage.

Rolled with a female fighter prepping for an upcoming fight and focused on technique as we started from my guard. She did her best to drive me into the cage, and I baited with a leg on the fence to spin away; she didn’t bite and we scrambled. Kept my hips moving and grabbed an outside half guard while working for a banana-splits sweep. I didn’t have the lockdown but managed to get it anyway. Though I probably could have muscled straight into the sub by pulling her leg past my head, I chose not to. Got to her guard, Bonaduce passed and backed her into the cage without being too much of a dick about it and using my weight advantage. Ended up in a bastardized twister side control threatening a kimura but decided to abandon it and restart from my guard in the center. The round ran out shortly thereafter. Pretty strong for her weight class and she’ll definitely give her opponent hell.

The next two rounds were with 3 newer guys, two of which I had at least 20lbs on, one was about my weight but very green behind the ears. Starting from my guard I had a heck of a time working a rubber guard for some reason and it seems I’ve lost flexibility after a layoff. Still, I scored two omoplatas, a Mir armlock, and a reverse, head/neck/arm armbar, and something else that I forgot.

I took a round off and then rolled with Jimmy, which means I basically spent the duration of the round trying to avoid getting submitted. I maintained top guard after starting from the knees while he worked a variation of a z-guard with me working to clear his hand off my neck. Felt I did pretty well for the most part but it was probably because he wasn’t in “tap or squeal” mode because he wasn’t digging bony parts of his appendages into soft parts of my neck/face/ribs/legs/etc. I attempted a knee wedge since he had a butterfly hook but couldn’t get it and we spent a bit of time doing micro-movement fighting for micro-superior position; a battle of inches, which of course I lost. I did manage to weasel my own hand onto my bicep to improve my grip on the wedge, but I knew there was no way I could then clear the hand controlling my neck to sit back and finish the sub. Abandoned it, worked for another Bonaduce pass and nearly got triangled but managed to defend by sitting on my heels and digging my chin into my chest to keep the arm away from the artery. I figured he’d switch to an armbar and was waiting for it. Got both arms past the guard for the pass, finally, but I guess he got tired of screwing around and before I could posture up to stack, he gable-gripped my head squeezed his thighs, and started to crank the crap out of my head/neck. I tapped before the full pressure came in, which surprised me a bit, but it was undoubtedly instinct mixed with experience; I knew that was going to hurt for at least 48 hours if I tried to tough it out.

I spent the remainder of the class working positions with one of the newer guys, one I outweighed by a good bit. Started him in side control, and had him try to maintain or improve to mount. Without using too much strength I was easily getting back to guard so I impressed upon him the need to keep me from getting space and to control or react to my hip movement. Started him in mount and he did a lot better, had decent balance and defended a few upas. Back was killing me for some reason (Saturday’s squat max attempt) so I’d lost a lot of my range of movement and flexibility. He defended a double under escape well but I finally got him, as well I goddamn should have. Props to the kid though, he stayed on the mat until class was over while I spent the last 5 minutes stretching and rolling my back on a medicine ball. What the christ? I guess it’s more ice and stretching for me today.