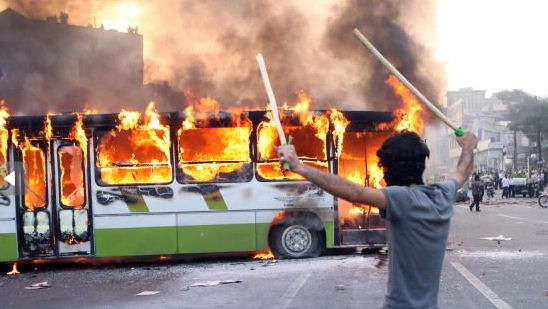 Like many people inextricably plugged-in to the Internet, I’ve been following the (hopefully) historic events in Iran over the past several days with a combination of horror and hope. Will we get to see the birth of a new, true democracy in the Middle East, or will tyranny slam its fist down upon the people?

But if you haven’t been keeping as much of an eye on the situation, here are a few key things that bear pointing out:

Mousavi, the candidate who lost the “election”, is also the former president of Iran. Under his watch in the 80’s, Iran began its nuclear weapons program. He has, smartly, positioned himself as the defacto head of the uprising, but is nowhere near as liberal as the majority of the people that comprise this movement.

There is an apparent power struggle going on between the Mullahs who appoint candidates for election, and it’s possible that Mousavi only seeks to shift the balance of power within the current system as opposed to what many of the protesters want, which is truly free elections and representative democracy as seen in the west.

The Basij are an extra-government branch of thugs chartered to keep order in support of the hard-line elements in the regime. Ahmadinejad, or “Dinner Jacket” as he’s been not-so-lovingly referred to in many tweets/facebook posts, was once a member of this group.

“Dinner Jacket” apparently was coined by our own former president, in reference to the man’s choice of wardrobe.

60% of Iran’s population is under the age of 30, and highly tech/internet savvy.

Anonymous has offered its support in the cause of free speech and open communication, for what that’s worth.

Fox News, for the most part, has been doing a surprisingly good job of coverage while CNN appears to be toeing the line with the Iranian regime to keep their access to the country. MSNBC has taken off for the weekend and is showing prisonsploitation documentaries. The BBC has apparently been kicked out of Iran (according to the latest news).

Twitter seems to be the primary outlet for most information despite the Basij smashing computers in universities and internet cafes, and the general internet crackdown across the country.